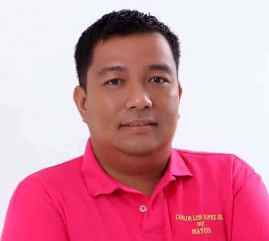 Born on January 31, 1978 to late Mayor Hon. CARLOS P. LOPEZ, SR. and Mrs. LEONARDA Q. FRANADA, the former Municipal Agriculturist of the municipality, service to the people of Asingan undoubtedly runs in their blood.

Mayor Lopez started his professional career utilizing his degree at renown institutions such as the San Roque Power Corporation and San Miguel Corporation. In 2003, he delved into public service working at the Office of the Mayor of Asingan as a Private Secretary.

Backed by his experiences and knowledge of the political scene, he ran for office and was elected as Municipal Councilor in 2004, re-elected by the constituency in 2007, and has served his 3rd term as Sangguniang Bayan member in 2010-2013 as the Number 1 Councilor.

His legacy and competence acted as springboard for him getting elected and re-elected as Vice-Mayor in 2013 and 2016 elections, respectively. And finally, he claimed landslide victory during the last 2019 mid-year elections as the Municipal Mayor of Asingan.

In over fifteen years of being a public servant, he gathered extensive knowledge and expertise holding Chairmanship and Vice-Chairmanship in various Sangguniang Bayan committees such as on Infrastructure; Public Works, Public Utilities, and Facilities; Tourism, Trade, and Industry; Market and Slaughterhouse; Women, Family, and Senior Citizens; Budget and Appropriations; Peace and Order and Public Safety; Education, Culture, and Social Welfare, Agriculture and Cooperatives; and Good Government, Public Ethics, and Accountability.

His assumption to office earned him several prestigious awards and recognitions including the PCL Award as Outstanding Sangguniang Bayan Member (2009), Most Outstanding Councilor in the Province of Pangasinan, A & E Program Implementor, and AMF Leadership Appreciation Award (2017), and most recently, the prestigious Seal of Good Local Governance Audit 2019 given only to municipalities with outstanding leadership and management capabilities, among others.

Mayor Lopez is happily married to MRS. SHERYL L. LOPEZ, a registered pharmacist and former Private Secretary of then Mayor Lopez Sr. They are blessed with a son:CARLOS SHENN L. LOPEZ III – who is now in Grade 8 at Divine Word College of Urdaneta.